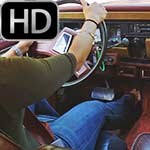 Jane Flip-Flop Pumping the Jeep with Brooke as Sexy Passenger

Hot days = easy-to-flood days = good days! 🙂
Jane cranks, drives, stalls, cranks some more and drives some more in black flip-flops. When they get to their destination, she gives up control of the pedals to let Brooke reach over with her long, toned and tanned legs to rev it up some before getting into a different car. Brooke has on these sexy blue peep-toe stilettos at first but then kicks them off to rev it up barefoot. Jane then gets back into the mix with her bare feet and they both tag-team the pedal before the video ends.