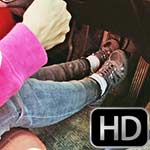 The PTP Shuffle is something we do very often. Instead of me shuffling the cars around for the girls, I have them do it because: 1) it’s sexier when they do it and 2) I’m the boss and I get to delegate. 🙂
They come out to the Cadillac and Jane gets behind the wheel in her over-the-knee riding boots while Brooke sits in the passenger seat and has on a pair of sneakers. Jane gets the car fired up pretty quickly and when she turns on the road, she gets a few hard stomps to the floor before she has to slow down.
Brooke gets in the Volvo and struggles for a bit to get this old thing going. Lots of fiddling with the choke and lots of pumping the gas pedal with her sneakers. I’m filming inside the car while Jane gets a few shots of this from inside the Cadillac. When Brooke gets the Volvo started, she romps on the gas a few times to clear out the gas that has loaded up. Jane captures some of the exhaust smoke that comes out while she’s revving.
Now Jane has to park the Cadillac where the Volvo was; she hits the gas a few good times before turning the key and the engine sputters and struggles to start but doesn’t fire up the first time. She pins the pedal to the floor and the engine roars to life and she then proceeds to park it.
She gets in the Volvo in the backseat and Brooke drives us back to PTP HQ…where she stalls it turning into the drive way…doh!

One Response to Brooke & Jane Shuffle Cars in Sneakers & Boots