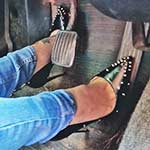 The video starts out with Jane firing up the Volvo and driving down to get the Camaro so Brooke can drive it back. Jane is wearing jeans with these black leather pumps with metal studs on them. She revs the car up for a bit after firing it up to try and get it to smooth out some since it’s been running a little rough lately.
Once they get to where the Camaro is, Brooke hops out and gets in the Camaro to get it started. She’s wearing a gray satin blouse, miniskirt and black leather peep-toe booties with metal studs. She cranks the Camaro up, which takes a few tries and a little stalling before revving it up and pulling it out of the parking spot so Jane can put the Volvo there. She then drives back to the house.