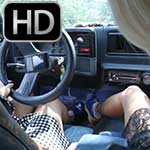 They just got done almost draining the battery in a custom cranking video. They let the car sit for a few minutes and Jane goes to start it up so they can rev the engine to clear out all that gas from it being flooded. She holds the pedal to the floor with her shiny black clogs and it takes a few tries to get the car to fire up. She’s revving it up when Brooke reaches over with her legs and wants to get in on the revving action. This first part is filmed from the backseat. Brooke then takes the camera and films Jane revving from the passenger side. After a  bit of that, I film them both from the drivers side as they take turns finishing out this revving-recharging scene in clogs. *whew*

One thought on “Brooke & Jane Recharge the Monte in Clogs”