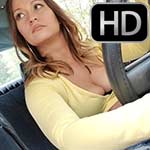 Brooke asks if Jane wants to try and of course, she says ‘yes’, so they swap seats. Jane then tries for a while before giving up the seat to Jewels, who is also unable to get the car started. The last part of this clip swaps to the backseat view for the first part of Brooke’s attempt at starting the car.