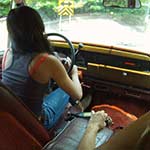 It was a hot one and I had these two gals go through most of the cars and try to start them up to see if they’d run.  They’re driving back to HQ in this clip and Brooke isn’t afraid to make the engine of that old Jeep scream!  She’s driving it like a boss on these backroads but all that hard driving goodness comes to bite her in the ass when the car conks out at a stop sign.  She tries but she’s just flooding it.  She swaps with Mari and Mari starts working the process.  She actually makes some progress and so Brooke wants to try it again and she is able to start it, after a few more stalls and my battery dies on the camera.  AARRGGH!