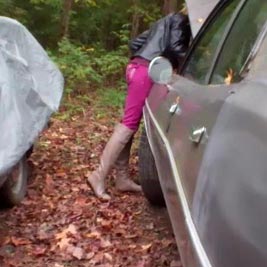 Buddah Gives Little Billy a Cranking Show in the Coronet

Buddah is having issues getting her old Coronet started. Billy sneaks up behind the old Bus to peek around it and sees the hood up on the Coronet. He quietly walks to the back of the Coronet and peeks around it to see Buddah leaning under the hood to try and fix the issue. He stares at her boots over her jeans and getting careless, Buddah spots him.