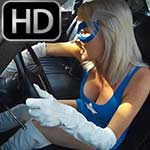 You’re in the garage, fiddling around with some chores when Buddah comes into the garage and quickly walks by…she must be late, as usual. She says she’ll be back later, she loves you and bye! She gets in the car and you go back to your chores.
She’s tried starting the car several times now and it’s not starting. You’ve told her in the past to not flood it but she rarely listens. She loves driving this car but unfortunately, she’s hell on it. You keep looking at her from the garage with a scowl to show your displeasure of her messing the car up. After a bit longer, you decide to stop what you’re doing and go over ‘Starting Old Cars 101’ with her.
You two fuss, she keeps cranking, you fuss some more and finally she starts the car and leaves….ooohh but not yet as she stalls the car backing up. You fuss some more and she leaves, for real this time.

Later in the afternoon, Buddah pulls back into the driveway and is all excited that she won the costume contest! She made some money and you suggest she can take you out to dinner. She gives a revving show out of excitement before turning the car off.