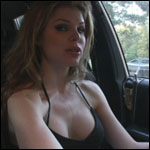 Candle is driving the both of you out for the evening.  She wants to take her can and she explains to you that it’s a bit temperamental, so it might take a few minutes to get going.  She pumps the big floor mounted gas pedal with her bare feet as you watch.  She keeps reassuring you that you both will make it but as the battery starts getting weaker, you’re having doubts about her ability.  She does get the car backed out of it’s spot but it dies there, permanently!