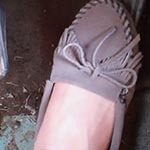 Cassandra Cranking the Volvo in Moccasins – #257

Cassandra had to make a quick stop and is ready to leave when she gets the feeling someone is watching her.  The parking lot is empty and it figures that her car won’t start!  She’s getting nervous because she doesn’t know what this person is up to.  She pumps away on the gas pedal in her gray moccasins, trying to start her car before this person creeps her out even more!

2 thoughts on “Cassandra Cranking the Volvo in Moccasins – #257”