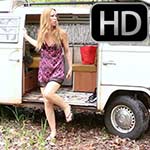 Cassandra wakes up in the back of the Bus that her and her boyfriend took out for some great camping fun!  But it’s not so fun to wake up alone.  Cassandra mumbles out his name to see where he is but she gets no reply.  She calls out some more, still nothing.  She sees that his phone is still in the car, which only adds to her concern.  Cassandra gets up and looks around while still in her pajamas, hoping that he’s just tinkering on the engine or maybe collecting some wood nearby.  When she gets out of the car to look around, nothing.  She’s calling out his name and as the rain starts to trickle down, she decides she’s had enough of his stupid game, she’s getting out of there!  She gets all the Bus doors closed, gets behind the wheel and it won’t start!  She tries and tries to get it started but maybe the choke is stuck, so she gets out and quickly looks at the engine.  While at the back of the bus, she hears a strange noise and nervously calls out to him….no reply.  Fuck it, she closes the hood to the engine, runs back inside the car and frantically tries to get it to start!