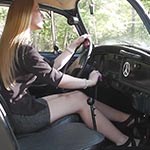 She’s gotta get to work for this meeting and sure enough, her damn car isn’t going to start!!

One thought on “Cassandra Cranking the Bug – #252”