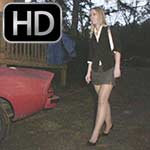 You want Cassandra to stay home this morning but she’s got a meeting she has to get to.  She asks you to get her some coffee while she finishes getting dressed but while you’re getting coffee, you also sneak out to her car and stuff a rag in the carb.  She doesn’t even get to drink any of the coffee because she looks at the clock and is already running late!  She scurries out to her car in the wee hours of the morning and you just patiently wait inside for your devious plan to spring into action.  😀