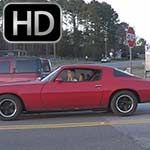 Cassandra Stalled in the Camaro – #294

Her Camaro is running weird and as she’s coming to a stop sign, she starts 2-footing the pedals to keep it running but as she stops, the car sputters and stalls out!  She quickly goes to work in her white loafers to get the old car cranked up again.  You can see her anxiety in the way she pumps and when you get an outside view of the intersection while she’s cranking it, you can see why.  A car has to go around her to make their turn and she hardly pays attention as she’s focused on restarting her engine!