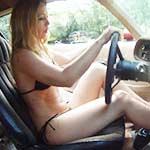 This long-legged, long-haired blonde beauty is trying her best to get the old Camaro running!  Cranking, some revving and stalling as she wears this itty-bitty bikini and some studded flip-flops!

One thought on “Cassandra Bikini & Flip Flop Cranking the Camaro – #501”