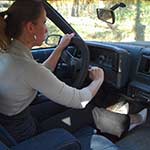 Cassandra’s friend let her borrow a car while her’s is in the shop.  Little does Cassandra know that her friend stuffed a rag in the carb to make it run like crap!  Cassandra shows up at a property to sell and you can hear the old Monte Carlo running rough and smoking.  The car stalls itself at about the same time she wants to turn it off.  She gets out and starts snapping some pics when she receives a call from her boss to head to another property right away.  She goes to leave but that little rag has caused the engine to be flooded and she can’t get it to restart!