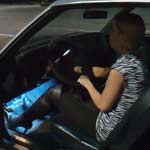 The girls were out for a girls night out and wanted to stop by Kohl’s to see if they had anything worth buying.  The already went to dinner and this is their last stop before calling it a night.  Cassandra gets behind the wheel and this is her struggle…

One thought on “Cassandra Nighttime Cranking the Monte with Scarlet”