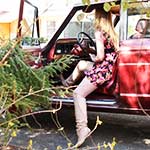 She’s having car trouble this morning and in the bushes, just out of view, Little Billy is watching her struggle. He gets a bit too focused on watching the action that he gets busted when Cassandra spots him in her rear-view mirror. She’s not sure why he was hiding but while he’s here, maybe he can help…

One thought on “Little Billy Peeps on Cassandra Cranking Her Jeep”