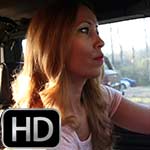 So much for her new ride being reliable… 🙁 It sputters a few times but doesn’t start.

One thought on “Cassandra Cranking the Renault GTA in Wooden Sandals”