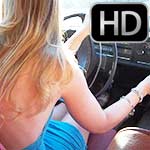 Cassandra Can Barely Drive a Stick – #407

Cassandra has a rough….a ROUGH time driving the Volvo today!  Lots of stalling, mis-shifting, revving too high, revving too low, neck-breaking bucking and other ‘Oh-Shit!’ moments in this clip!  If you like girls who have a hard time driving a stick shift, you’ll like this one! 🙂