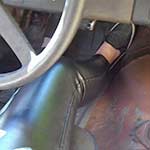 She’s filming herself firing up and driving the old 77 Z28 in tight leather pants and black Vans sneakers.