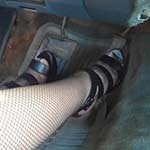 Cassandra is looking to do some aggressive driving if she can get the car started. It takes a couple of minutes to get the car going and warmed up before she backs it up down the driveway. She drives around with no destination in mind. She’s just looking to stretch it’s legs while wearing her sexy leather strappy sandals, fishnets and leather driving gloves.
She hits the brakes hard at one point and stalls the car out.  She’s afraid she might have to call Scarlet but she manages to get it started again and keeps on driving. She does a lot of two-footing while driving in this clip as well.

One thought on “Cassandra Driving Around in Fishnets, Gloves & Strappy Heels”