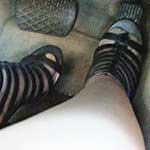 I hope in and ride shotgun while she drives us back to get a different car. We’re in her white Mercedes car and she’s wearing leather gloves, leather jacket, leopard print dress, sheer pantyhose and black leather strappy sandals.

One thought on “Cassandra Driving Mercedes in Hose & Strappy Sandals”