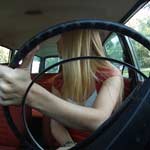 The Scenario:
“Cassandra is a very determined wife who is going to move the Volvo without her husband’s help.  She has a struggle to get the Volvo started with lots of long flooded cranking attempts. She pulls the choke right out and pumps the gas pedal a lot aggressively in her high heeled pumps.  Eventually Cassandra pushes the choke in and gets the Volvo started and the car gets stuck in the grass/ mud but she is determined to drive forwards to try to free the car. We hear the rear wheels spinning as Cassandra revs up the engine and continually tries to drive forwards. The car stalls several times but Cassandra doesn’t give up and resorts to her trademark heel-toe (what REAL heel-toe action is) whilst trying to crank the engine up. Cassandra eventually removes her shoes and we see bare feet with red painted toenails on the pedals. We see lots of pedal-pumping and driving/ stuck footage in her barefeet too.”