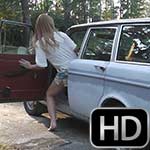 Cassandra & Scarlet are going to the beach.  Cassandra is loading up the Volvo at her house before she heads over to Scarlet’s to pick her up.  Cassandra has some trouble getting the car started but she keeps at it and gets the car started before the battery dies.  She isn’t about to let her trip get ruined!
She shows up at Scarlet’s house and the girls put more gear in the back of the wagon but when they go to leave, the damn thing won’t start again!!  This time, Cassandra kills the battery but fortunately, Scarlet has a spare handy.  Once it’s replaced, Cassandra gets the car started and revs it up nice and good before leaving.  Just as things look like everything is going to finally go smoothly, Cassandra stalls the car while backing up…shit!!

**Ignore my dialogue in the very beginning.  I didn’t catch it until after I had deleted the original clips.  So to preserve the quality of the clip, I didn’t edit it out.  Oops, lol! **