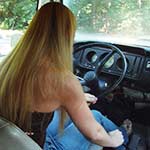 This is a request for Cassandra moving the old bus around the yard.  She starts it up and beings driving it around the yard only to have the bus stall a lot.  She also finds herself in tight spots as she continually turns it around.  Maneuvering around all the cars requires her to do a lot of heel-toe pedal to keep the bus from bumping into other cars or objects.  Cassandra is a champ at some heel-toe action and yes, she does it the right way.  Once she’s had her fun, she parks the bus and hops out.