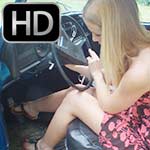 She’s trying to fire up the Bug but it’s reluctant to start.  When she gets it started, she revs it up but it keeps stalling out on her.  A mix of cranking and revving in this video with some exhaust pipe shots.