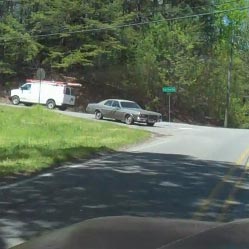 Cassandra Broke Down in the Coronet in Tan Pumps

She was driving the Coronet over for a shoot when it stalled on her at a stop sign.  She called to tell me she was broke down and couldn’t get the old Dodge to start.  I hopped in the Jeep and started driving to her rescue.  This video picks up with me arriving on scene to be the hero! 🙂  Won’t find anything more real and genuine than right here!