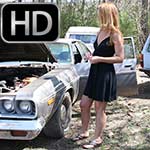 The hood is up and she’s standing beside the old Coronet…that isn’t a good sign. She already killed the battery trying to get it started before I got there. In the time that she’s been waiting, the battery has recharged itself a little bit and she gets in to see if it’ll start before we go through the work of jumping it off. After a handful of cranks, that battery just clicks. So we connect the Jeep to it and she gets back in to try and get it started. She’s pumping fast and gets the car to finally sputter enough to start and rev it up a little.
The next scene is her moving the car out of the way for Scarlet to leave.

One Response to Cassandra Needs a Jump in the Coronet, Black Dress & Flip Flops