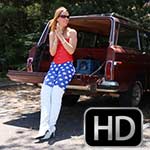 She shows up sporting her sexy patriotic outfit.  She wants to drive the Camaro because it doesn’t get any more Americana than that!  She hops in, has some trouble starting it, as usual, but finally gets it going!  You get a self-filmed point of view as she drives over to where she’s going to watch a tiny parade.  She finds a tailgate to sit on from a stranger and when the parade is done, she’s ready to leave but her damn car is being a pain to start!  Her new-found friend is lingering and after another battle, she gets the car started and takes off!  But it’s a bit premature as she stalls at the stop sign.  Round 3, begin!!  Just a normal day for her and this old Chevy!