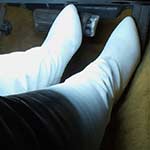 Cassandra Going to a Costume Party but Car Won’t Start

She’s got this cute go-go girl outfit on with some white thigh high boots and is trying to get to her Halloween party tonight.  She’s taking the Camaro but it won’t start or stay running.  The battery is getting weak and when she gets out to check under the hood, something charges at her…Ralphie??…or something else?!