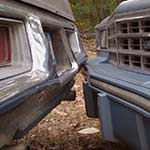 She’s driving the Monte Carlo in a tight and short white dress, her bare legs and these black stiletto pumps. She’s got to parallel park the Monte in between the Coronet and Volvo. It’s hard to do in a rough-running old car. She keeps hitting the bumpers of each car in between the Monte Carlo dying constantly. She gets out to see how close she is..soo close! She’s getting frustrated but manages to finally get the Monte Carlo wedged between the two other cars.