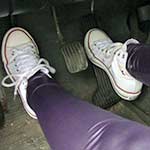 I’m out giving Cheyenne a refresher course on driving a stick-shift while Cassandra waits. She gets bored and tries starting the Coronet, Volvo & Camaro to help pass the time. She’s wearing white Converse sneakers and purple leather-like leggings.