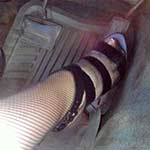 Rearranging cars is never a simple task here. Too many cars and not enough driveway. She first moves the Monte Carlo out of the way. She gets it started within a couple of tries and romps on the gas pedal quickly a few times. She then speeds away to park the car.
Next, she’s walking to the Coronet to park it in the bushes. It’s more stubborn to start than the Monte. Once running, she romps the pedal a few times and pulls forward to back it up into the bushes. She is almost done parking when she stops paying attention and rams into the tree. She also needs to re-position the car, so I make her pull out and do it again. Mainly, I was hoping she’d get a little stuck and she did. She pumps the gas quickly with her wheels spinning trying to get the Coronet out and onto the driveway again. After another attempt or two, with a little more wheel spinning, she finally gets it parked.
Lastly, it’s time to park the Jeep for Scarlet to use in a few minutes. She starts it up, moves it around to the front and then pumps the gas a lot after shutting it off. She’s going to make it hard to start for Scarlet…or at least try to.