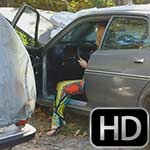 Getting the Coronet running (successfully) and trying to get the Volvo going but no luck.

One thought on “Cassandra Starting the Coronet & Volvo in Flip-Flops”