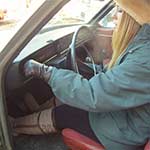 Cassandra Super Cold (for the South) Starting the Fleet

This half-hour clip was filmed today, during one of the coldest days we’ve had in years!!  Yes yes, I know you northerners, Canadians and Russians will probably tell us that 17 degrees with a windchill of single digits to -7 is a ‘heat wave’.  But look, for those of us in the Southern US, that’s COLD!  I figured it would be cool (pun intended) to get some genuine, candid cold starting clips of Cassandra in the various cars we have.  The cold was too much for some of the batteries as they didn’t even turn the cars over.  Luckily, I keep a supply of deep cycle batteries on hand and it allowed her to spin the engines over to try and start.  This is a casual video as we’re talking to each other while braving the cold to see how these cars behave.