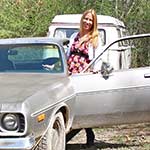 She gets in, cranks it till it starts and then gives it some good revs. Views from the drivers side and at the rear of the car. Near the end, she gives it a few romps while standing up.

One thought on “Cassandra Revving the Coronet Floral Dress & Boots”