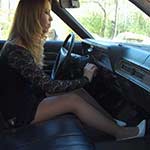 The old Coronet was giving her fits earlier so she’s ready to punish it for acting up!!