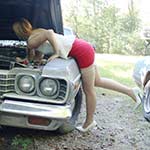 Cassandra agreed to tend to a house with the people are away.  She shows up the first day and parks the Jeep next to some car covered up.  She keeps glancing back at it as she walks to the house.  The allure of some mystery machine underneath the cover that needs started and revved up remains on her mind as she walks through the house, checking to see if everything is okay.  As she leaves a note on the fridge, she sees a set of keys dangling in front of her like the forbidden fruit to Eve.  The urge is getting stronger as she can see the car out the window, the cover flapping in the wind beckoning to be removed.  She starts pumping her right foot up and down as her mind wanders off to her sitting behind the wheel, pumping that gas pedal…the hell with it, she grabs the keys and gets to it!!