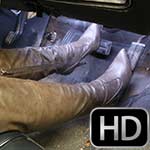 Cassandra Stuck in the Coronet – #531

Cassandra is heading to the airport to pick up her husband and her young step-son is riding along.  Cassandra’s husband likes her playing in old cars and asks her to pick him up in the old Coronet of his.  It rained earlier and the car is parked behind the house where she’ll have to use their non-paved driveway to get out.  She gets her step-son, Nathan, situated in the back seat of the car and then slides in behind the wheel to start the car.  She manages to get the car moved from the parking spot with relative ease but the rain storm earlier really washed out the driveway.  The Jeep would be more suited for this but she knows her hubby will be in a really good mood if she shows up in this old clunker, so she presses on, trying to get through the ruts created by the storm.  You can hear the car bottoming out on the rocks and ground, it sounds worse than what it really is but nevertheless, this poor old car may not survive this.  She gets hung up a lot and you can feel the car shuddering and shaking from the wheels spinning in the mud, trying desperately to find traction to no avail!  Cassandra asks you to hand her the boots in the back, she wants to get out and see how badly stuck she is.  You get out with her and it looks pretty bad but Cassandra tells you she can handle it and for you to hop up in the front seat with her and watch her get it out.  You climb in next to her and get a glorious view of those tall boots working the pedals to get this Coronet unstuck and moved.  Realizing she isn’t going to be able to get this car down the driveway, Cassandra isn’t worried about not picking up her husband in the Coronet because when she tells him why she didn’t drive it, he’ll be excited to hurry home and have her try again!

One thought on “Cassandra Stuck in the Coronet – #531”