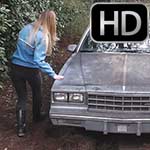 Hana is filming Cassandra trying to get the Monte Carlo unstuck AFTER Hana buried the thing while trying to move it.  As you can see from the ground, she made a mess!  This is filmed entirely from the outside as Cassandra tries her best to get the car unstuck.

One thought on “Cassandra Trying to Undo Hana’s Stuck Work”