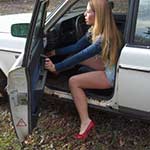 She’s not too happy that you moved her car into the yard to do some work on the house.  She walks to her car and gets her stiletto’s a bit muddy in the process.  She fires her car up and with the ground being soft from a recent rain, one of her wheels start to spin.  She rocks the old station wagon to get some momentum going but she’s just digging a rut.  The car has a overheating issue, so after a few minutes of revving the engine trying to get unstuck, she has to let it sit for a while.  When we pick up again, she has already put some water in the radiator and she’s hoping she can get the car unstuck before it overheats again.  Unfortunately, she can’t get the car unstuck with the ground as wet as it is, so she’ll have to wait later.

**This was a video created and directed by Cassandra and filmed with the help of her hubby!  She told me she had a stuck video for me and I was like, “Whoa!” 😀 **

6 Responses to Cassandra’s Volvo Got Stuck in the Yard