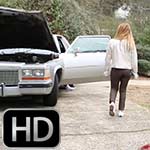 The video starts out with Cheyenne moving the Monte Carlo around in her white Keds so they can take the Cadillac for a spin. It just had it new motor put in and doesn’t have the complete exhaust on yet, so it’s running open headers and it’s ratty-loud. lol But Cassandra gets it fired up and she’s not paying attention while backing up and I have to get her to stop before destroying the front of the car…crisis averted…she continues backing up without incident.
She drives around, giving the engine some time to break-in and see if there are any kinks that need to be worked out. We arrive at her place and I have to remind her to go in at an angle because the car is so long. The car chugs and die at the exact moment it gets parked…couldn’t time that any better if you tried!