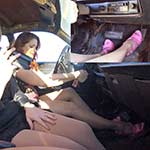 This whopper of an update hits all kinds of genres of delight. It’s a multi-cam view of these girls heading to a location to do some shooting. As we all know, it can be a little adventurous when you’re using a 35+ year old car. Cassandra is doing the driving at first in this video. After some quick pumping of the gas to get the car started, that is.
They make a stop to get gas and of course, get a lot of lookie-loo’s because of the outfits they’re in. Once filled up they get back in but this time, Vivian gets behind the wheel. She can’t start the car, so she’s there at the gas pump cranking this old Dodge as people come and go. She gets it started after a bit and they can continue on their way.
They’re having some fun on the drive, playing with one camera to get some selfie-views while a mounted camera gets a shot of all of them. They’re turn is coming up and Vivian takes it a little fast and the Coronet stalls out on them. They pull over to the side of the road but the car won’t start. They’re at a decent sized intersection and right in between a gas station and grocery store. So lot’s of folks seeing this old car with 3 gals broke down. They struggle for a while as the engine is extremely flooded out. They finally get the car started and try to finish their trip without another incident. The car is wanting to die but Vivian’s expert skills manage to keep it going long enough to make it.

One thought on “Cassandra, Cheyenne & Vivian in ‘Coronet Hose’”