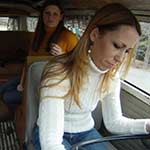 This is an alternate view of the video ‘Cassandra, Elizabeth & Scarlet Pedal Pumping the Bus’ where the girls put some miles on a new motor that was put into the old 1972 VW Camper Bus. This video starts with Scarlet cranking up and driving first in black boots before she trades seats with Elizabeth.
There is a camera mounted on the front windshield and behind the gas pedal. This video has picture-in-picture.

One thought on “Cassandra, Elizabeth & Scarlet Pedal Pump the Bus, 1 of 2”