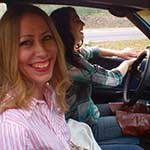 Cassandra & JEM Playing in the Monte Carlo in Boots

What better way to show a new model how things go around here than to throw her into the fire?! Cassandra is going to show JEM how to try and subdue the Monte Carlo into submission and move it from where it’s parked. Of course, I up the difficulty level by making her have to back it out instead of just easily pulling forward. Gas fumes, smokey exhaust and dirt fill the air as these two girls crank, rev and spin the wheels!
Welcome to PTP, JEM! 😀