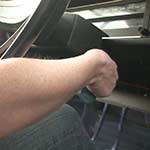 Cassandra is giving Scarlet a ride home in the Volvo but the car won’t start.  She keeps trying as Scarlet ends up talking about and playing with Cassandra’s arm hair.

One thought on “Cassandra & Scarlet Cranking the Volvo – #292”