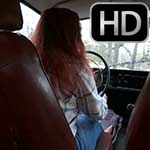 Cassandra is telling you how she flooded the Volvo out and is hiding in the backseat to capture Scarlet struggling to start the old Volvo. Scarlet gets in, unaware that Cassandra is lurking just behind her, and tries to get the car started. The battery is already weak and with the car flooded, it doesn’t look like Scarlet is going to get it started. She’s pumping in her tan cowgirl boots and hears a giggle in the backseat…busted!!

One thought on “Cassandra Floods Scarlets’ Volvo & Hides in Backseat, 1 of 2”