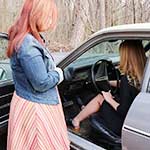 The LOVE their sexy clogs and as they slip them on, they talk about them for a moment.  The girls then walk to the Coronet to see if they can get it started.  Cassandra slides behind the wheel first and tries getting the old Dodge to run.  Scarlet gives her some tips since what Cassandra is doing doesn’t seem to be working.  After trying for a while, Scarlet tells Cassandra to move and she then gives it a try.  She doesn’t have any luck either and the battery ends up dying.