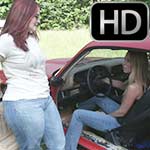 Both ladies are wearing some rugged, leather sandals with socks as they crank up this old Camaro.  Cassandra tries to start it first but no luck.  Scarlet gets behind the wheel and shows Cassandra up by getting it started and she then proceeds to rev it up good!